Sometimes when I climb into bed and turn out the lights I am flooded with memories of the tribunal of elders who disfellowshipped me. After one short announcement with my name in it, the process of getting disfellowshipping quite literally cut me off from my family. My kids were told they could no longer have association of any kind with me. My daughter called me long distance from Vancouver — I lived in Saskatoon at the time. She heard the news within a few days and called me to ask, a quiver in her voice, “Mom, is it true that you are disfellowshipped?”

I replied more calmly than I imagined I could, “Yes, it is true.”

My daughter began to sob, “Mom, you have to come back!”

“I won’t be coming back,” I heard myself say.

She hung up the phone. I knew the shunning had begun.

My grown children attended different kingdom halls than me, yet apparently had been notified of my getting disfellowshipped. I was officially cut off from any further association with my beloved family. Why didn’t I try to “save” myself? I knew about the elders’ meeting. I was invited via telephone. An elder left a message on my answering machine, “We have arranged a meeting at (such-and-such a date and time) to conclude this matter.”

The word “conclude” in the message indicated to me that a decision had already been reached, without even hearing my side of the issue. Based on that comment, I realized that there would be no point in attending. I was not up for that nonsense. They already knew what their judgment would be whether I was in attendance or not — and I didn’t need the drama. I didn’t want to explain myself or my actions to these men who had no clue what I was going through — men without compassion or heart.

I did not reply to the message on my phone — nor did I attend their judicial meeting. They were not prepared to hear my defense, but only to judge and condemn me — my faith was found to be defective. I was getting disfellowshipped without my attendance at the elder’s judicial committee meeting.

Other humans can judge my faith as defective? Something did not ring true.

This news came as I was still grieving over my mom’s death. She died quite suddenly — without warning — a month earlier. I wasn’t sure what the evidence against me was. Perhaps an elder’s wife had seen my partner and me leaving a dance — together. I had been “disobedient” in following their explicit instructions to leave the dance world and come back to their meetings. I was unrepentant. There was nothing left to do except discipline me to the fullest extent.

I did the only thing I knew how to do in a crisis — I prayed.

Now, according to the beliefs of the religion, once a person is disfellowshipped, they are completely cut off from God. To the patriarchal way of thinking, the disfellowshipping took place because there was something seriously defective about my faith. I was spiritually unclean and God would turn himself away from me, a dangerous unrepentant sinner.

My experience with prayer, however, demonstrated to me instantly that their belief in blanket condemnation was unwarranted. I felt a strong spiritual connection immediately. Something inside me knew I was safe. I felt more peaceful and calm than I could ever imagine. In that moment, I was deeply consoled. The comfort I felt was truly amazing — and so contrary to what my belief system had been up to that point. I realized what my parents’ religion taught about an external, cruel, unforgiving God could not possibly be the truth. I was always taught that when you leave God, he will leave you — a punishing belief system.

I had not left God, though — a detail the elders did not consider during their hasty decision to extricate me from the congregation. God meant a lot to me. Maybe just a different God than the one they worshiped. Maybe I was getting out of Babylon! Even if I was cut off from this toxic group — like a tree being cut down to its stump.

I could have lay down and died — and many members who find themselves on the “wrong” side of a tribunal of elders actually do kill themselves.

But I lived. Why did I live? — When others in my shoes have died? Fortunately for me I had an existing support system in place. I had a therapist with whom I had established a deep trust over a period of several years. I had my dance world, including my very concerned dance partner who prayed with me as I sobbed and grieved for the loss of my beloved children, who elected to choose the family religion over me.

So, I was able to survive yet another trauma. 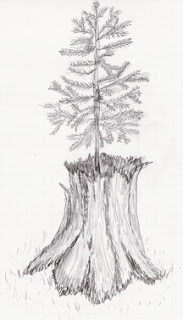 To get away from that unhealthy environment of being shunned, I moved to Vancouver, British Colombia, I found another dance community, and resumed dancing. I felt like a tree who was cut down — yet I have seen new baby trees emerge from existing stumps. I was amazed. Out of my “stump,” emerged some new growth, a baby tree had come forth. The tribunal of elders who judged me could not — ever — destroy my faith. I was going to be okay. I was healing because perhaps I believed in myself enough. If a tree stump could regenerate itself, so could I.

It is true. The pain in my body is gone. I now stand straight and tall. I have a coat that tells the story. I used to wear the same coat as a member of the religion, where the belt used to tie just under my chest. The belt is now situated in a new area of my coat. The belt now sits four inches lower. My chest has opened up. I stand upright now, and the belt now sits at my waist. My waist is now separated from my chest by a bodice. Perhaps that’s the difference between going in service and going dancing. Now I do something I’m passionate about, instead of something some cult tells me I “should” be doing. It’s easy to stand tall when I’m engaged in an activity I love!

I now thank my soul for this journey out of the Jehovah’s Witnesses religion and for the tribunal of elders giving me the boot. “Kicking me out” was just what I needed to get away from the family religion and become self-directed and independent — get on with my life.

Is it a miracle? Some might think so. I say, “maybe, but not necessarily.” No matter what I or anyone else thinks, the entire situation still leaves me with a curious question: “Why is my health improving — now that I am disfellowshipped?” Why do I stand straight and tall, when I was developing a “hunch-back” while a member of the cult? Again, I’m sure it’s because of my change of healthful activities. Trees in nature and the coat both tell two different tales, but together they reveal the whole story.

I attribute my improved health for choosing a healthier lifestyle. I am grateful that I can trust myself — finally. I can believe in nature and my Self — instead of cult rules. My own life experiences have demonstrated to me that I am able to heal when I let go of rules and dogma that no longer serve my best interests. I believe we can heal ourselves on all levels and I am off to prove it! From now on, I’ll continue to choose nature — which is real — over faux man-made rules and religious theologies and un-provable theories.

Kindness of a Stranger
Free Will in religion
Hearts of Stone
Shunning Mom
Video: How I got Disfellowshipped

This site uses Akismet to reduce spam. Learn how your comment data is processed.