↓
Home Menu ↓
Skip to primary content
Skip to secondary content
Home→Shunning→Kindness of Strangers
I was half a block away from the corner when the bus rolled up to the stop. “Oh, darn,” I thought, looking down dejectedly. “There goes my bus.” It was Monday morning and I was feeling sorry for myself. I looked up again noticing the bus was still sitting at the corner. That was unusual. I was about to discover the deeper significance of the kindness of strangers in my life.

I picked up my pace, being reminded about a similar day last week. I was running for the bus as it approached the stop. Nevertheless, the kindly bus driver waited for me. I thanked him. Smiling gently he said, “I know who my regulars are.” His kindness was appreciated. But, for me to think he would again be waiting this morning seemed preposterous. I was just too far away. Nevertheless, I picked up my pace.

By the time I reached the corner I was running. Surprisingly, the bus remained stationary. I rounded the corner, catching the smiling eyes of the same bus driver. “I can’t believe you waited for me — again! You are so kind!” I was breathless, as I gratefully climbed aboard.

“I know you are one of my regulars,” he responded gently, and again I thanked him. I located a seat near the front of the bus. Quite unexpectedly, I became filled with emotion. Tears suddenly flooded my eyes. Reaching for a tissue in the flap of my backpack, I wondered why it is so easy for some people — strangers — to be naturally kind — yet relatives could express cruelty with equal vengeance.

My mind flashed back to the past weekend. I asked my brother a simple question, “Do you ever hear from my kids?”

He did not respond. My brother, an “elder” in his church, is allowed to speak to me on rare occasions to determine if I’m “repentant”. He, as well as my two grown children are all members of the Jehovah’s Witnesses religion. Furthermore, they are obliged by a “disfellowship order” to shun me because I chose to leave the family religion. Yes, my own children have cut off all association from me. They could only express kindness conditionally — if I “repented of my ‘gross sins'”. Until such time I must be punished via their cruel practice of shunning. In other words, they aren’t allowed to speak to me or otherwise associate with me.

One might reason, “Esther, you must have committed some vile deed for them to treat you so badly.” I confess, I sought a divorce from my philandering husband, I entered therapy, I began taking dance lessons, I made many new friends who the religion labelled “worldly” because they were not Jehovah’s Witnesses. Last but not least of all, I had an affair with my exciting ballroom dance partner — yet I loved every minute of my new, unused life.

“Judge Not” — Yet They Judge

Because I was unrepentant of my perceived wrongdoings, I was judged by a tribunal of three elders. My faith had been found to be defective and I was “disfellowshipped” from the congregation. Simply put, I was “kicked out.” But, being “kicked out” seemed like a fine idea to me, because I did not want to be a part of the family religion any longer. Unfortunately, the religion does not leave the matter at merely being “kicked out.” The punishment must be severe — and it must be on-going — to their way of thinking.

Since leaving, I have deliberately purged the beliefs with which I had been raised. It was my only chance to be healthy, I felt sure. Members of the religion are taught that “upon leaving, you will be taken over by the devil.” Or, “there is no place for you to hide from the wrath of god.” Surely, if I retained any of those beliefs, I would self-destruct. Religions keep crying for more freedom, yet, they would exercise their freedom license to do what? 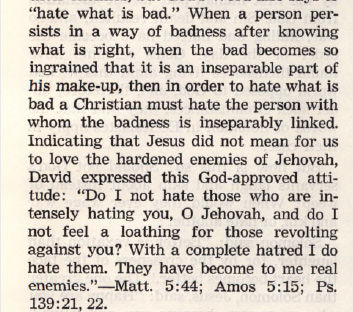 Many ex-members who find themselves on the “wrong” side of the elder tribunals do not survive their harsh discipline — they commit suicide. Likely, they recalled the teachings of the Old Testament where the Israelite elders stoned “sinners” to death. The Jehovah’s Witness members were taught this story in application to the “disfellowship order”[1] as a lesson in fear. Such “sinners deserved to die” the elders explained, in order to not contaminate the rest of the clan. Without a doubt, the religion teaches its members to hate. After one brief announcement from the platform, I was no longer considered a friend to any in the congregation. I’m not making this up. It’s a quote from their own Watchtower magazine!

Recently, the Watchtower Society/JWORG has made a public announcement about familial shunning, “Our organization does not interfere with family matters.” Yes, that is the official statement to the press. After all, they would like to present themselves as a “moderate” Christian religion. Meanwhile, behind the scenes a completely different story emerges. I, for one, am feeling the effects of their strict enforcement of the shunning rule. Members who leave are “deleted” — ostracised — demonized,

“Satan’s influence…will be to cause the other…members of the family to…join…his course…To do this would be disastrous, and so the faithful family member must recognize and conform to the disfellowship order.”—Watchtower 1952 Nov. 15, p. 703.

I am living proof that they still hold to the Disfellowship Order because I am treated as a pariah — an outcast — a dead person. Their official statement for the press is a blatant lie.

My Children Taught to Fear

My children have been taught to fear me. Apparently, I have been taken over by the devil. I’m no longer the loving mom they once knew. When a person leaves the Jehovah’s Witnesses faith, the other assumption of the elder tribunal is that the person “[does] not love Christ.”—Watchtower 1952 Mar. 1, pp. 131, 134.

To that presumptive statement, I would respond,

“Love for a religious theology is completely separate from Jehovah’s Witnesses’ brand of love. For those who still believe the Bible, Jesus’ philosophy was one based in what some call unconditional love — the Jehovah’s Witnesses are steeped in fear. Love and fear are opposites.”

What happens to a member in good standing if they do not conform to a “disfellowship order” or “shunning order” against a “defective” member? Their very own theological magazine states,

“If a [member]…ignores the prohibition on associating with the disfellowshipped one, that [member] is rebelling against the congregation of Jehovah,…he also should be disfellowshipped.”—Watchtower 1955 Oct. 1, p. 607.

Yes, members are threatened with expulsion if they continue to associate with an ex-member. I am in possession of such an elder threat — a letter — ordering me to shun my beloved mother.

Why did the kindly bus driver show up in my life? I believe the Universe brings these stark lessons in contrast to illustrate the religious bigotry as well as abuse that I have been subjected to since leaving the family religion. It seems to me the tribunal of elders do not want me ever to forget that I have “left Jehovah.” Yes, it is true, I have left a god who teaches fear, bigotry, and hatred. The compassionate bus driver brought me a spiritual lesson to show me that there are many caring people in the “world” — yes,  that same world the Jehovah’s Witnesses preach will be soon destroyed at Armageddon. Personally, I make no such judgments.

I thanked the good-hearted bus driver. I brought him a bag of organic chocolate covered almonds the next day. I’m grateful for his silent reminder to be firm in my resolve to be true to myself, even if it means never seeing my children again. After all, being true to my Self is the only way to heal from religious bigotry. Integrity to my principles enables the Universe to fill my life with caring and loving people — just like the empathic bus driver — for whom I am truly overwhelmed with appreciation. I am eternally grateful for the kindness of strangers.
___________

More on Shunning and Disfellowshipping

This site uses Akismet to reduce spam. Learn how your comment data is processed.